Quartet DynPEQ is a digital audio workstation plugin offering four bands of dynamic parametric equalization along with an interpolating output peak limiter.  This plugin supports multichannel stems, which makes it appropriate to reside on the master fader or the end of the processing chain.

Great care has been taken under the signal processing hood so that the operation of this new paradigm is performed as unobtrusively as possible. We realize that the best mastering work is the hardest to detect. 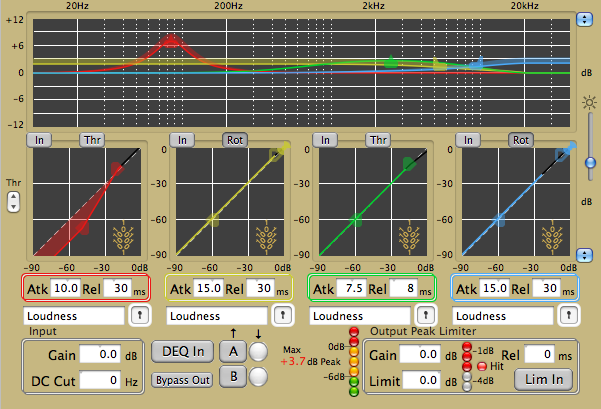 In addition to DynPEQ, Quartet offers other useful processors to the mastering engineer. The input signal is filtered by a DC-blocker that can be tuned all the way down to 0 Hz. An interpolating analog peak detector follows DynPEQ processing. Finally, a peak limiter assures that the analog peaks stay within full scale.

Because of the complexity of this plugin, there are operational features included that assist in your work. There are A/B registers within the plugin itself for comparative listening, along with DynPEQ and limiter cut buttons. There is a persistent store outside of the plugin and workstation for useful DynPEQ band settings, for operations such as de-ess, de-hum, brightness, and your own creations. There is a store with the workstation project for an unlimited number of Quartet patch registers, for aggregating track settings and augmenting the A/B capability.