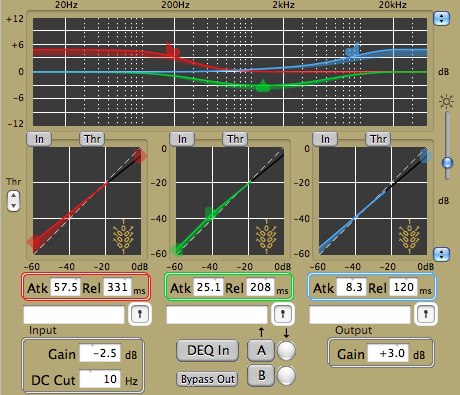 Great care has been taken under the signal processing hood so that the operation of this new paradigm is performed as unobtrusively as possible. We realize that the best processors are the hardest to detect.

In addition to DynPEQ, Trio offers other useful processors to the audio engineer. The input signal is filtered by a DC-blocker that can be tuned all the way down to 0 Hz. Gain controls for both pre-DynPEQ and post-DynPEQ levels assure that the plugin cooperates with the rest of the processing chain.

Because of the complexity of this plugin, there are special operational features that assist in your work. There are A/B registers within the plugin itself for comparative listening, along with DynPEQ and effect cut buttons. There is a persistent store outside of the plugin and workstation for useful DynPEQ band settings, for operations such as microphone enhancement, control of resonances, de-hum, brightness, and your own creations.