Version 1.4.2 of DynPEQ allows the size of the GUI window to increase if the screen height is large.  The plugin interface should no longer be tiny if you are using a new hi-res monitor.  This new feature may have the minor side effect of briefly showing a different window size on initialization in Pro Tools.  Please note that some Audio Unit (v2) workstations do not support dynamic sizing and resizing of plugin windows.

This new version fixes the ability to move drawers in the Band Toolchest and other irritations, adds new slider detent values to peak/dip Q, and adds Band Toolchest presets for guitar, kick, and FMCB starting points (h/t to Nicolas Hosford for the new presets).

Version 1.4.1 of DynPEQ fixes bugs and supports the new 64-bit only Gatekeeper for Mac OS X 10.14 and up.  The new Gatekeeper mandated a new set of plugin installers in the product package.  The disk image window will now show a folder in the lower left corner with the name pkg10_14_up.  If you are using 10.14 and up, use the installers in this folder instead of the legacy.

The sidechain search feature has been enhanced by allowing the maximum band level compiler to reset when any of the band tuning parameters are modified.  So you no longer have to click to reset the level compiler when you have found your band of interest in sidechain search.  We know we should have thought of this earlier–we apologize for that. 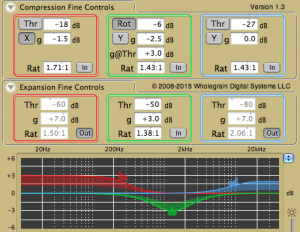